Rivalries grew stronger this evening as the Dash for Cash event took place at Goolwa Regatta Week – and with a $750 winner-takes-all cash prize up for grabs, all friendships went off the transom. 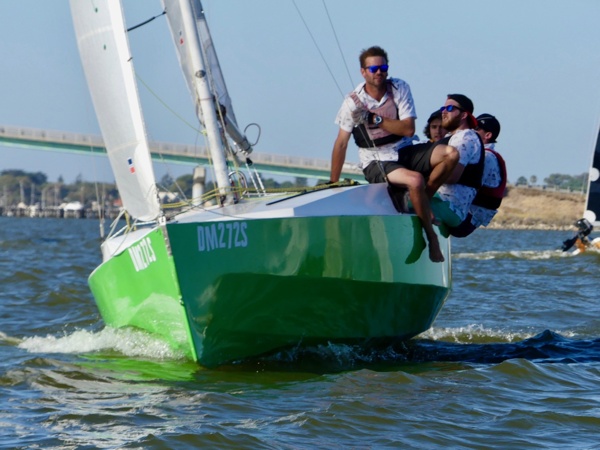 It was much the same as yesterdays 'tune up' race with the Dash for Cash consisting of two sprint races with results based on corrected handicap time.

As there were 12 boats competing, the first race was split into two heats and the best four boats from each heat then qualified for the final.

The first race had a gusty 15-knot breeze from the south-southwest with big fleet separation in both heats and a few nervous close encounters.

The final however was a different story – less wind created close and intense racing with many close calls, tight roundings, choice words and a few small love taps.

At the first top mark rounding the fleet was incredibly close, with barely a minute between first and last. Randall Cooper on Nerana, a favourite to take out the win, was second last at this juncture.

Positions were constantly changing and each bottom mark rounding was tight with one of them three boats wide – thankfully it managed to stay clean. However you could hear a great deal of banter being thrown around between the boats.

By the last leg the top three were sealed in line honours and the rest of the fleet had spread out over the leg, positions set from there on.

Line honours went to Matt Irvine in The Kraken, a Modified TS16 with a slick hull design and a big spinnaker, while second was Andrew Stevens in Envy, an Elliott 7, and third to Randall Cooper's Nerana, a Restricted 21.

However the big cash prize was going to be awarded to the winner on corrected time.

The top three on corrected time were:

Congratulations to all sailors, especially the top three, who placed in both over the line and corrected results.

This race was an excellent lead up to the Coorong Quays Milang-Goolwa Freshwater Classic, which will be held on Saturday morning as a large fleet of trailables, sports boats and dinghies compete in the most iconic freshwater race around.

Let's hope the weather is kind.