It was a majestic sight for the dozens of spectator boats lining the river between Clayton and Goolwa as a large fleet of boats raced their way along the channel to the finish line in the first The Marina Hindmarsh Island Milang Goolwa Freshwater Classic in 5 years.

In what has been hailed as a sure sign that the river has recovered, a fleet of 194 yachts from around Australia lined up for the start of The Marina Hindmarsh Island Milang Goolwa Freshwater Classic on Sunday the 22nd of January.  The course took entrants across Lake Alexandrina, around Point Sturt, along the River Murray and under the Hindmarsh Island Bridge to the finish line in front of the Goolwa Regatta Yacht Club.

Winds were drifting in from the East at around 5 knots, making for a slow motion start and heralding a long race.  The bulk of the fleet tacked into the shore, hoping for a lift off the land, whilst the rest of the fleet headed out into the lake, looking to catch the light easterly breeze first, avoid tacking and stay clear of other boats.

As the main fleet approached Point Sturt, conditions lightened even further, leaving many yachts struggling to reach the turning buoy. It was here that the boats that sailed out into the lake had an advantage as they were able to drift down onto the mark rather than having to work up to it. A number of boats were simply unable to reach the mark as they drifted forlornly on mill pond waters.

It was so light that crew on Karnagree were able to get some sleep on the foredeck as they made up for the night before.  Meanwhile crew on other boats took the opportunity to have a quick swim as they attempted to stay cool in the warm and still conditions.

Those who had made it around the Point Sturt had the advantage of the river current as they awaited the predicted change.  By 1pm the change was in and yachts were soon enjoying a perfect 10 to 15 knots from the South East as kites were set and sheets eased.

Unfortunately tragedy awaited the renowned vintage river boat Terrible when her rig came down after she just clipped a channel marker with her stays.  It was a sad sight for the boats that sailed past as Terrible’s skipper and crew worked to recover their rig and sails.

The race formally concluded back at the Goolwa Regatta Yacht Club, where the Official Presentations took place. Don Richardson, commodore of the GRYC, in welcoming competitors and guests noted: “No other freshwater yacht race brings competitors and spectators together the way this classic yacht race does.  I want to thank the hardworking team of volunteers who have made this event such a success, without volunteers our clubs would not function, our races wouldn’t start, our stomachs would be empty and our drinks warm!”

The “Cock of the Lake” trophy, for the fastest elapsed time in any division went to Wild Turkey a Stingray Mark II skippered by Brett Lienert.

In a repeat of the previous race in 2007 Game Over was the first boat from Division 2 to round the buoy at Point Sturt and in accepting the Crowhurst Trophy said “the race was superb, we were on the start line when the gun went, were able to work well to Point Sturt and then had a fabulous kite run on our way to the finish line.  The crew were grinning from ear to ear the whole way!

“Finally I want to thank The Marina Hindmarsh Island for coming on board as major sponsor, the other sponsors and I encourage all competitors to keep doing this classic race,” he finished.

Game Over also took out the Blue Darling Perpetual Cup for the fastest time in Divisions 2 and 3.

The W.R.Appleby Perpetual Cup for the first boat to finish on corrected time in Division 1, Vintage River Boats, went to Marguerite, owned and skippered by Bram Portas.  “I want to thank the Flag Officers of both the Goolwa Regatta Yacht Club and the Milang Regatta Club and everyone in both ports for a great race – there’s nothing like it,” he also thanked the skipper of Zealot for lending him a spinnaker and for his advice on how to fly it.

The A.B.Kinnear Perpetual Trophy for the first yachts on corrected time in Divisions 2 and 3 was presented to Hot Gossip, an Eagle 6.5 skippered by Stuart Shimeld from Division 2 Fast Racing and Sirocco, a Bonito 22 skippered by Bob Petts from Division 3 Racing.

Whilst the winds were favourable, they just weren’t strong enough to allow any boat to beat the current race record for a boat in Division 2 and the Out of the Blue Perpetual Trophy remained in the trophy cabinet.

In a long held tradition, the Keith Veenstra Memorial Trophy for the first Restricted 21 to cross the finishing line was awarded to Bright’un. In accepting the trophy, Mike Shirmer who owns and skippers Bright’un paid his respects to the Veenstra family and thanked them for their ongoing support to the Goolwa yachting and boating community.

In the cruising fleet, it was Crew’s Union skippered by Peter Mitchell from the Fast Cruising Division 4 and Little Blue skippered by Peter Stace from Cruising Division 5 that were awarded the Commodore’s Trophy for the first yachts on corrected time.  Commodore Richardson, in presenting the trophy praised the cruising fleet which had more entrants than any other fleet on the water.  He said “it goes to show that cruisers can and do race and that there are plenty of boats out there enjoying our fabulous lower lakes and river”. 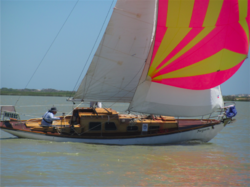 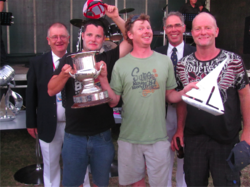 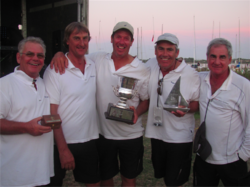 Crew of Bright'un, winner of the Keith Veenstra Memorial Trophy.

Photos from the official photographers for the MG race are available for viewing and purchase.